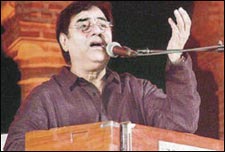 Jagjit Singh Ghazal Nite is an event that took place on 02-Oct-2006 in Hyderabad.
REVIEW FOR JAGJIT SINGH GHAZAL NITE
Share. Save. Connect.
Tweet
USER REVIEWS FOR JAGJIT SINGH GHAZAL NITE
1 - 1 OF 1 COMMENTS
POSITIVE  |  NEGATIVE |  NEWEST  |  OLDEST  |  MOST HELPFUL  |  LEAST HELPFUL
USER RATING
10
2 USERS
Artist(s') Talent
Entertainment
Ambience/Crowd
Value For Money/Time
NA
NA
NA
NA
Good for kids/family - NA
Good for dates - NA
Good for networking - NA
Time well-spent - NA
Pooja Shah on 14th Oct 2006, 12:42pm | Permalink
This was the best of Jagjit Singh ji's live concert. The event is a memorable one. If any of you can help us out to get a recorded cd of that concert, it would be greattt!!!

Any information about the availability of the cd, pls feel free to email me on the above id.

ADVERTISEMENT
This page was tagged for
was jagjit singh a good artist
HITEX HITEX events
October 2006 events
hyderabad concerts / live music
hyderabad other
Follow @fullhyderabad
Follow fullhyd.com on
About Hyderabad
The Hyderabad Community
Improve fullhyd.com
More
Our Other Local Guides
Our other sites
© Copyright 1999-2009 LRR Technologies (Hyderabad), Pvt Ltd. All rights reserved. fullhyd, fullhyderabad, Welcome To The Neighbourhood are trademarks of LRR Technologies (Hyderabad) Pvt Ltd. The textual, graphic, audio and audiovisual material in this site is protected by copyright law. You may not copy, distribute, or use this material except as necessary for your personal, non-commercial use. Any trademarks are the properties of their respective owners. More on Hyderabad, India. Jobs in Hyderabad.